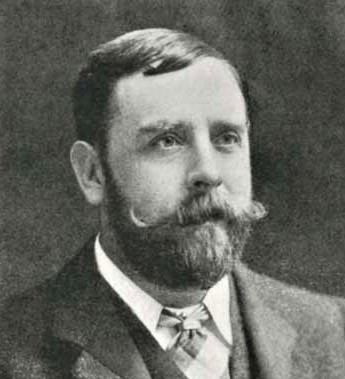 Frank Matcham (1854 – 1920) must be the most distinguished and prolific late 19th century theatre designer.  The writer Alan Bennett has commented that there was a Matcham theatre (too many of his theatres have sadly been demolished) in every corner of the UK.  Across the country in Brighton, Portsmouth, Morecambe, Leeds, Nottingham and Newport and in London his theatres include the Coliseum, Palladium and Hackney Empire, to name but a few.  London Festival Opera has had the pleasure and thrill to perform in several of Matcham’s most magnificent theatres including the Buxton Opera House and Grand Theatre Blackpool.

Matcham married the daughter of his tutor, Maria Robinson, and had two daughters Eveline and Constance.  He had a great interest in music and owned a Stradivarius violin though he humbly admitted that he ‘wasn’t particularly good at it’.  He also loved to stage amateur dramatics and the ‘family troupe’ would present theatrical performances for their neighbours and friends in the intimacy of his home – somewhat ironically as he had designed some of the world’s greatest large scale theatres!

There is something very special about performing in a period theatre and we usually perform in period costume.  For a Frank Matcham theatre this would be Victorian or Edwardian evening dress.  For the audience the effect is like going back in time both aurally, in the repertoire of Handel, Mozart, Rossini, Verdi and Puccini, and visually with our set and costumes.

It is always a thrill to arrive in a Victorian venue where the back-stage and dressing rooms maybe a little shabby but make up for that by having such atmosphere and there is a sense that many, many starts and celebrities will have appeared in the theatre – from Lilly Langtry to Ken Dodd!  Modern theatres are lovely and comfortable, but there is something very special about arriving, rehearsing, changing and performing in a period theatre – especially when they are designed by the great Frank Matcham.  For more details see the excellent website for the Frank Matcham Society www.frankmatchamsociety.org.uk