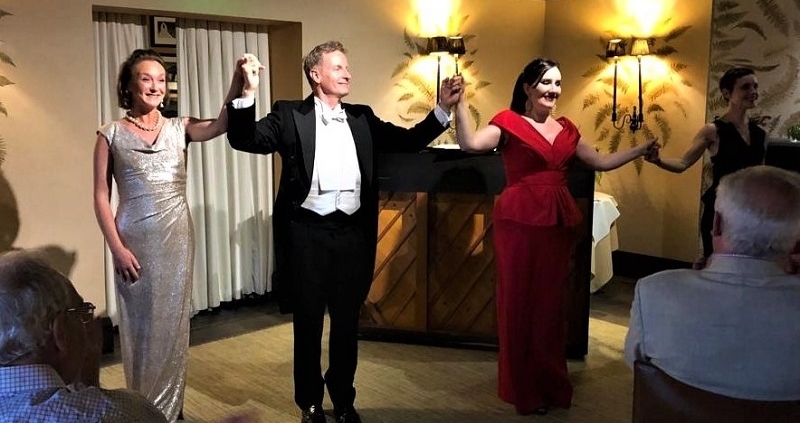 Live opera is the perfect entertainment for a Birthday Party, particularly if the guest of honour is an opera fan!  Hearing live opera up close is stunning, it provides party guests with a thrill they will remember for ever, and the entertainment can end with a rousing operatic ‘Happy Birthday’.

We will work with you to create the perfect programme for the occasion, whether you would like the performance to be in one section at the beginning or end of dinner or performed in two or three sections between the courses of the meal.  We have performed music for a birthday party during a lunch or dinner.

A ‘Surprise Start’ is always a wonderful way of kicking off the entertainment, with singers disguised as waiters or serving staff who can burst into operatic song to the amazement of the guests.  We have even shocked a birthday guest of honour himself when his family were arranging a surprise party for him – not an evening he will forget in a hurry!

Most of our performances are in the UK but we regularly travel to Europe and often perform further afield – we have presented opera for a birthday party in Marrakech, Barbados and Hong Kong.

Depending on the venue, period costume might add an extra visual impact to enhance the performance, and accompaniment is ideally a piano or backing tracks as an alternative.

The repertoire can include celebrated arias and ensembles from the operatic repertoire (such as ‘The Marriage of Figaro’, ‘La Traviata’, ‘Carmen’ and ‘Tosca’, pieces from the operettas of Offenbach and Gilbert & Sullivan, and hits from the popular musicals of Gershwin, Rogers and Hammerstein, Bernstein and Sondheim.  There is so much wonderful repertoire to choose from to celebrate at your birthday party! 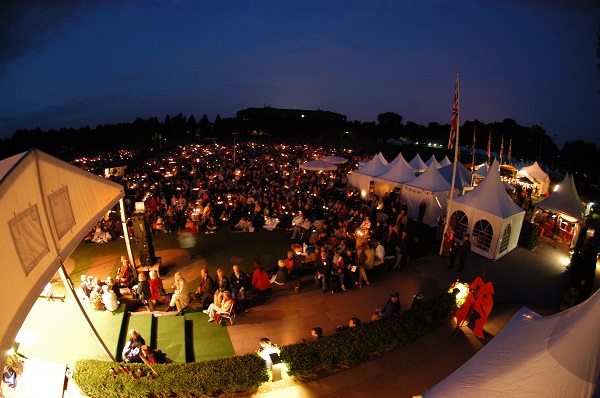 There are many wonderful music and arts festivals around the world, with more springing up all the time.  As our name suggests, you may not be surprised to hear that it is those that feature classical music which hold a special place in our hearts!

London Festival Opera has been lucky enough to have performed at many wonderful festivals in some stunning locations around the world, in the UK, the Windsor Festival, Salisbury Festival, Church Stretton Festival to name but a few.  Overseas we have appeared at HIFA (Harare International Festival of the Arts), The Holders Season in Barbados and The British Day in Hamburg, amongst others.  No matter where the location, the atmosphere has always been electric!

The beauty of festivals is they have often arisen out of the passions of one or two people who have then worked tirelessly to see their vision become reality.  They can therefore offer an eclectic selection of niche cultural riches, whether following a specific genre of the arts or perhaps the heritage of the festival’s location itself.  Bringing opera to a music and arts festival not only allows existing lovers of the art to indulge further in their passion, but it also brings opera to a potentially wide and diverse audience, some of whom might not previously have experienced (or imagined they might enjoy) the thrill and joy of a live opera performance.

Music is a language which crosses the boundaries of history and international borders, and no matter where the roots of our own personal heritage lies it is a language we all speak, to a certain extent.   Whether it is the rhythms of tribal music or the heart-stretching climax of an operatic aria which sets our hearts racing, we all have within us the capacity to be moved by music, transported (if only for a while) to another place.  No matter where our passions lie there is a festival out there for us, one which will offer us a musical experience like no other.

A particular thrill for us as an opera company, has always been the audience’s reaction to our performances at festivals.  In the intimate setting of the Baroque Hall of Trafalgar Park our audience was only feet away, giving lots of scope for interaction and involvement.  Seeing the smiles and tears was just wonderful!  At the other end of the scale was the response of the audience at HIFA in Harare; this attracted a crowd of over 5,000 for our Opera Gala Evening and to hear each of these people screaming for an encore is a memory which will never leave us!  Equally, seeing a largely German audience waving mini Union Flags and enthusiastically singing ‘Land of Hope and Glory’ with us as we performed at the al fresco ‘Last Night of the Proms’ in Hamburg was a slightly bizarre but incredibly moving experience.

Live opera, up close, is stunning; it bristles with drama and passion and bubbles with humour and fun.  Whatever the country or scale of location it is always a pleasure to share the power of opera and to perform the masterpieces of the greatest composers – with Handel, Mozart, Verdi, Bizet and Puccini you can never go wrong! 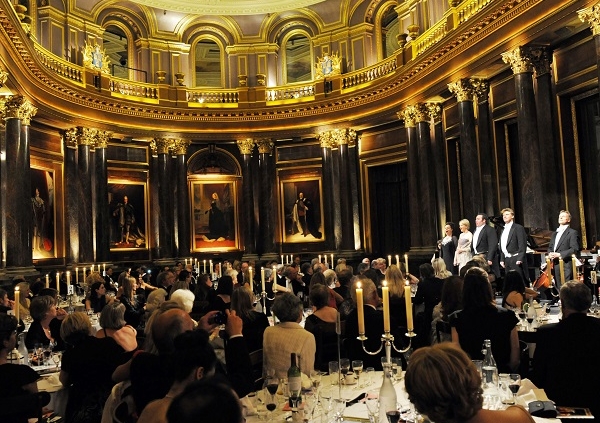 Fundraising in times of financial hardship and political uncertainty is tough, no matter how worthy the cause.  Charities now, even more than ever, need to find new, innovative ways to catch the attention of potential donors and to bring them into a ‘feel-good’ setting, where spirits can be raised as well as funds!

Traditionally, large-scale charitable fundraising has often been aimed at a luxury market; drawing perhaps from a relatively small group of donors, albeit one with all the right resources!  Increasingly, however, charities are looking to broaden their base of regular donors to include a new and larger demographic.  What better way could there be to attract a new crowd into the concept of generous and regular giving than by treating them to a spectacular event which offers a touch of luxury, something with a real ‘Wow!’ factor?

Opera can often be perceived to be a serious and heavy art form, one with which you need to be familiar in order to enjoy it.  Nothing could be further from the truth!  A gala dinner (for instance) with entertainment by London Festival Opera includes many of the best-known arias so will appeal equally to newcomers and seasoned opera lovers alike.  It will provide a sophisticated but lively and fun evening, full of drama, passion, humour and interaction with guests.  Who could fail to feel flattered to receive the attentions of Carmen as she serenades a male guest with a red rose during her infamous Habanera aria?  Or indeed, have their adrenalin levels raised by The Barber of Seville approaching them with a large and shiny blade?!  All this combined with the thrill of hearing at close range the human voice in its most refined form is an unbeatable combination.

London Festival Opera have been involved with charity fundraising events for many years, having been the vehicle for raising many hundreds of thousands of pounds for a wide range of charities, including the British Red Cross, Animal Health Trust, The Duke of Edinburgh Award Scheme, Tusk, Cancer Research, Mencap, Barnardo’s and Tommy’s Campaign.  Venues have ranged from London Livery Halls to private country houses, including theatres, concert halls, schools and Royal Palaces along the way.  We have many years of experience creating bespoke programmes for charity events, so please do feel free to contact us if you are considering organising a special event and would appreciate advice on how best to entertain your guests for maximum effect.  As well as advice on the type of programme which would be most suitable for your cause we can also advise on sponsorship ideas which have worked and helped charities raise funds in the past.

If guests leave a fundraising event without having had their emotions heightened, their passions aroused, or their laughter muscles exercised they are more likely to leave with money still in their pockets.  If you move them with excitement, passion, laughter and tragedy all in the space of an hour, having set those emotions to some of the greatest and most rousing music ever written, you’re on to a winner.

Nothing beats the thrill of hearing an opera singer up close and the power of the human voice will astound your guests.  There is so much repertoire to choose from; passionate arias, romantic love duets, and powerful ensembles.  Combine this with humour and audience interaction and you are on to a winner!  Opera is perfect too for multi-national events and conferences.

Opera is a sophisticated art-form but is essentially an entertainment and can transform an event into something truly memorable for you and your guests.  We create programmes that are ideal for existing opera lovers but which will also appeal to newcomers alike.

We will work with you to create the perfect programme and include something for everyone: from the celebrated operas (such as ‘The Marriage of Figaro’, ‘Carmen’, ‘La Traviata’ and ‘Madame Butterfly’), operettas (including the works of Gilbert & Sullivan), and musicals (with hits from the works of Gershwin, Rogers & Hammerstein, Bernstein and Lloyd-Webber).

Accompaniment can range from an orchestra, instrumental ensemble or backing tracks if a piano is not available.  The singers can appear in glamorous modern evening dress or in stunning period costume for an added visual impact (Georgian, Regency, Victorian or Edwardian).

Our performances are usually introduced with a few carefully selected words that will bring the arias and ensembles to life for an audience.

London Festival Opera has arranged performances to link with all ranges of events – from a private dinner party for 20 to a large-scale al fresco event for thousands.  We perform not only in the UK and Europe but often travel internationally to Hong Kong, India, Barbados and Canada.

Please do call us to discuss how live opera can transform your next Corporate or Special Event into something truly memorable – an occasion you and your guests will remember for ever.  Please call 00 44 (0) 1722 324847.

London Festival Opera is working on ‘Brexit The Opera’. What more dramatic inspiration could one ask for in a 21st Century operatic plot? And it’s not over yet…..!

A tale of Love, Treachery, Drama, Passion and Political Intrigue set to the music of the great composers, including Handel, Mozart, Verdi and Gilbert & Sullivan. Watch this space for developments and performances! Please contact us if you are interested in developing this unique project!

Sometimes it is not possible to have a piano for the accompaniment at a performance. An excellent alternative is orchestral backing tracks. We recently successfully used these for a corporate opera in a hotel, a private birthday party in a Livery Hall and for an evening of opera in an enchanting wood for a charity event.

We are thrilled to announce the launch of our new website for London Festival Opera.  In addition to giving details of the wide range of performances we can present, the website also tells the background of the company and has a Gallery with pictures, music and movies.  We also give details of our public performances. 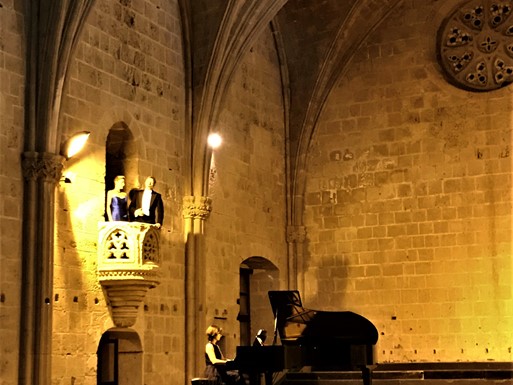 We returned to Kyrenia for another performance in the setting of the 14th century Refectory of Bellapais Abbey. The balcony was perfect for a romantic duet!

Very much looking forward to getting into the  Christmas spirit soon with four ‘A Christmas Night at the Opera’ performances. The Exchange Sturminster Newton on the 7th and 8th December (sold out), Northcott Theatre, Exeter on the 9th (just 7 tickets left today!) and The Forum Theatre, Malvern where tickets are selling well.  Do come and see the show!!